When Gia Montgomery’s boyfriend, Bradley, dumps her in the parking lot of her high school prom, she has to think fast. After all, she’d been telling her friends about him for months now. This was supposed to be the night she proved he existed. So when she sees a cute guy waiting to pick up his sister, she enlists his help. The task is simple: be her fill-in boyfriend—two hours, zero commitment, a few white lies. After that, she can win back the real Bradley.

The problem is that days after prom, it’s not the real Bradley she’s thinking about, but the stand-in. The one whose name she doesn’t even know. But tracking him down doesn’t mean they’re done faking a relationship. Gia owes him a favor and his sister intends to see that he collects: his ex-girlfriend’s graduation party—three hours, zero commitment, a few white lies.

Just when Gia begins to wonder if she could turn her fake boyfriend into a real one, Bradley comes waltzing back into her life, exposing her lie, and threatening to destroy her friendships and her new-found relationship.

I’m not sure that Kasie West can do wrong when it comes to a contemporary romance.

This was my 3rd Kasie West book to read and I think it’s my new favorite so far (This one, PS I Like You, By Your Side–in that order). I’m anticipating reading her future as well as the other older titles I still haven’t read.

Anyways, one thing about Kasie’s books is that the synopsis never makes them seem as good as they really are. For example, the synopsis for this sounds super cheesy. Not even going to lie about it.

Either way, I thought the concept was cute even if the synopsis sounded cheesy, so I was glad it ended up working out in my favor.

I don’t want to say much for the sake of spoilers, but the character development for Gia was great for me. I loved seeing how she grew and changed as a person.

Her ending was almost exactly what I wanted. My only complaint is that I wish there was an epilogue. Maybe something telling what happens over the summer or once she gets to college. However, I get that it was probably best left the way it was.

This would be a great summertime beach read because it reads quickly, but I’m glad that I didn’t wait that long to read it. I own two of her older books and haven’t read them, so I’m looking forward to getting to them soon as well as her upcoming book in July, Lucky in Love. 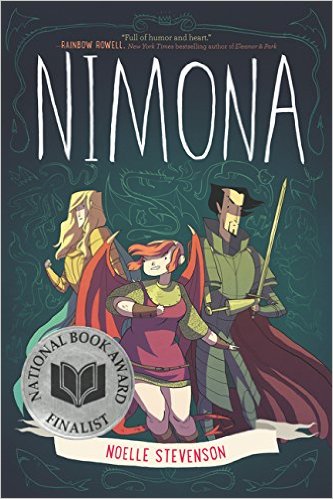 The New York Times bestselling graphic novel sensation from Noelle Stevenson, based on her beloved and critically acclaimed web comic. Kirkus says, “If you’re going to read one graphic novel this year, make it this one.”

Nemeses! Dragons! Science! Symbolism! All these and more await in this brilliantly subversive, sharply irreverent epic from Noelle Stevenson. Featuring an exclusive epilogue not seen in the web comic, along with bonus conceptual sketches and revised pages throughout, this gorgeous full-color graphic novel has been hailed by critics and fans alike as the arrival of a “superstar” talent (NPR.org).

Nimona is an impulsive young shapeshifter with a knack for villainy. Lord Ballister Blackheart is a villain with a vendetta. As sidekick and supervillain, Nimona and Lord Blackheart are about to wreak some serious havoc. Their mission: prove to the kingdom that Sir Ambrosius Goldenloin and his buddies at the Institution of Law Enforcement and Heroics aren’t the heroes everyone thinks they are.

But as small acts of mischief escalate into a vicious battle, Lord Blackheart realizes that Nimona’s powers are as murky and mysterious as her past. And her unpredictable wild side might be more dangerous than he is willing to admit.

I’d already heard tons of great things about Nimona, but I was still pleasantly surprised about it.

Nimona was a hilarious character, but one with a huge heart. I found that she actually reminded me of a student at work. In fact, that student read the book after me and said, “oh my goodness, this is me!” She was right though 🙂

I can’t help but hope that there might be more stories about Nimona in the future because she was such a wonderful character. I’m picky about graphic novels as far as recommendations go because I know that  people like certain things, but I would easily suggest this to anyone. 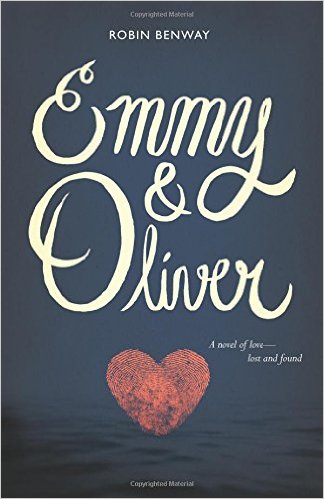 Emmy and Oliver were going to be best friends forever, or maybe even more, before their futures were ripped apart. In Emmy’s soul, despite the space and time between them, their connection has never been severed. But is their story still written in the stars? Or are their hearts like the pieces of two different puzzles—impossible to fit together?

Emmy just wants to be in charge of her own life. . . . She wants to stay out late, surf her favorite beach—go anywhere without her parents’ relentless worrying. But Emmy’s parents can’t seem to let her grow up—not since the day Oliver disappeared.

Oliver needs a moment to figure out his heart. . . . He’d thought, all these years, that his dad was the good guy. He never knew that it was his father who had kidnapped him and kept him on the run. Discovering it, and finding himself returned to his old hometown, all at once, has his heart racing, and his thoughts swirling.

Readers who love Sarah Dessen will devour these pages with hearts in throats as Emmy and Oliver struggle to face the messy, confusing consequences of Oliver’s father’s crime. Full of romance, coming-of-age emotion, and heartache, these two equally compelling characters create an unforgettable story.

Emmy and Oliver was a book that I actually even debated buying. The silly thing is that for awhile it was on sale for $1.99 and I was debating it with a gift card. (Buying ban–don’t judge me!) That said, I downloaded the sample to help make my decision and was instantly hooked. As if that wasn’t enough, I asked my mom if she thought that I’d like it. “Are you kidding? This sounds like one you would read. Buy it and quit asking me silly questions.”

However, even though the beginning hooked me I was still skeptical. There’s no way that it was going to keep me hooked that much, right? Nope. I was constantly drawn to the characters and wanting to know what happened next. I was sympathizing with Oliver’s situation and trying to understand how on earth Emmy was dealing with everything.

In all, I absolutely loved this story! It normally takes a bit to hold my attention, but Emmy and Oliver’s relationship and subsequent problems kept me on edge until the very end.

I highly suggest this as it is one of my new favorite contemporaries!