I know I’ve posted a good bit about this book and that Hilaria is a friend, but…y’all…get it! So so good!

I know I shared my review and a summary earlier, but here’s a little excerpt that might help sway your decision that you need Lou and Ella in your life 🙂

I had never kissed with my eyes open. This was going to be my first time. It took me a couple of seconds to be completely aware of what was happening and realize that I wasn’t imagining his lips pressed on mine. I closed my eyes then, and my lips parted, searching for his tongue. I had wanted this kiss for days, and my tongue wrapped around his a little too fast, too eager.

His hands cradled my face so softly, so gently. My arms circled his neck, and I ran my fingers through his hair. His lips were silky soft, and there was a faint taste of cinnamon on his tongue from the apple tart we just had. His tongue caressed mine over and over until I was breathless. A moan escaped my mouth as he released me and he attacked me again, nibbling at my bottom lip. When he kissed me again and started sucking on my tongue, I was a goner. Heat spread under my skin, coursing through my body, all the way to my fingertips.

He stopped kissing me and released a breath. I found him looking at me with an expression of wonderment in his eyes.

I was glad it was nighttime. The way he was looking at me, had my heart hammering against my chest, and the blood rushing to my cheeks.

Maybe one day I would live to tell Lou Rivers had mad kissing skills. I’d be like one of Elvis’ many flings telling the press—decades later—how great he was. I wondered if I’d get to say we had gone out on dates.

“You should never follow a kiss with an ‘I’m sorry,’” I told him playfully.

“I can’t catch a break with you, can I?” he asked, chuckling.

I shook my head no, but I was smiling at him.

“Was it good?” he asked, leaning in, bumping his shoulder against mine.

“Oh my God! What are you, fifteen?” I slapped him playfully on the arm.

“I’ll take that as a yes,” he said with a smugness I hadn’t seen before.

“You know, I’m really not too sure it was that good. I can hardly remember it, already,” I teased.

“You already forgot our first kiss?” he jokingly asked, the smile on his face telling me he was enjoying this. Our first kiss. By the way he said it, it sounded like it was going to be followed by many more.

“I might need a refresher,” I answered, looking at him defiantly.

He leaned down and kissed me again. This time, things were different. Our first kiss was slow, gentle, building. As his lips claimed me, he closed the distance between us, wrapping his arms around me and pulling me to him. As his tongue kept teasing me and tantalizing me, he placed a hand around my waist, and with the other one behind my head, he dipped me slightly backwards. Show-off. I gripped his shoulders, trying to hold my balance. His body was flushed against mine, and I felt something else as well. Apparently, it didn’t take much for him to get…excited. I liked that I was the one doing that to him. His tongue circled around mine over and over, going deeper. It knocked the breath out of me. This one was an unforgettable kiss. And now I was going to want more; there was no going back.

He stopped, leaving me mid-kiss. A sigh escaped me, and as I opened my eyes, I glanced at him. He was breathing fast, and even in the semi-darkness his eyes looked wilder and even more magnetic than usual. A satisfied, lopsided grin spread on his face.

In this asylum, your mind plays tricks on you all the time …

Delia’s new house isn’t just a house. Long ago, it was the Piven Institute for the Care and Correction of Troubled Females — an insane asylum nicknamed “Hysteria Hall.” However, many of the inmates were not insane, just defiant and strong willed. Kind of like Delia herself.

But the house still wants to keep “troubled” girls locked away. So, in the most horrifying way, Delia becomes trapped. And that’s when she learns that the house is also haunted.

Ghost girls wander the hallways in their old-fashioned nightgowns. A handsome ghost boy named Theo roams the grounds. Delia learns that all the spirits are unsettled and full of dark secrets. The house, too, harbors shocking truths within its walls — truths that only Delia can uncover, and that may set her free.

And she’ll need to act quickly — before the house’s power overtakes everything she loves.

Katie Alender brings heart-pounding suspense, gorgeous writing, and a feminist twist to this tale of memories and madness.

I got this ARC back in July and took forever to finish it. Things are crazy with the beginning of a new school year. That doesn’t mean I didn’t love the book though. This may actually be my new favorite book from Alender!

I initially felt bad for Delia. Yeah, she made a mistake, but she wasn’t really a BAD girl. Then again, we learn that most all of the other inhabitants of the house were misunderstood as far as their behavior goes. However, as far as the storyline goes…despite my lack of TIME, I found that I was constantly wanting to know what the heck was going on with Delia. What was the story behind the house? Was there any way to fix the situation?

Fans of Alender, and thriller fans in general, are going to love this one. I, for once, can’t wait to get a copy in my library and get my students hooked on the story. They’re going to enjoy it so much! 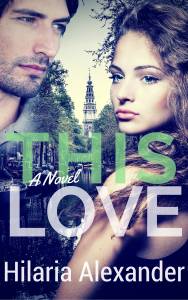 Running off to Amsterdam is the best decision Ella ever made in her life. In just a few months, she’s been able to put her past behind her and has found a new family and friends. She can almost ignore the voices in her head telling her this idyllic scenario is temporary.

When Lou Rivers shows up in Amsterdam, he’s the constant reminder of the life she led and the mistakes she made. As the two of them embark on an emotional and musical journey across Europe, Ella will have to face her own insecurities and make a decision that might break them apart forever.

I know that I posted the cover and raved about this book, but…y’all. It’s only .99 right now. SUCH a good story that I’d easily pay more, so do be sure to check out This Love!