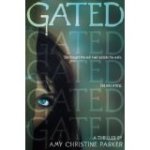 Genre: YA- realistic (dystopian…but not at all dystopian?)

She thought the evil lived outside the walls.

In the Community, life seems perfect. The members of this isolated suburban development have thrived under Pioneer, the charismatic leader who saved them from their sad, damaged lives.

Lyla Hamilton and her parents moved here following the 9/11 terrorist attacks, looking to escape the evil in the world. Now seventeen, Lyla knows certain facts are not to be questioned:

Pioneer is her leader.
Will is her Intended.
The end of the world is near.

Like Noah before him, Pioneer has been told of the imminent destruction of humanity. He says his chosen must arm themselves and prepare to fight off the unchosen people, who will surely seek refuge in the compound’s underground fortress–the Silo.

Lyla loves her family and friends, but given the choice, she prefers painting to target practice. And lately she’d rather think about a certain boy outside the development than plan for married life in the Silo with Will. But as the end of days draws near, she will have to pick up a gun, take a side, and let everyone know where she stands.

5/5—I rarely want to give a 5. Truthfully, 5’s are reserved for books that I can see myself reading more than once and still loving. There aren’t many books that I read over and over.

I’d never read a book about a cult. Are there other YA books about cults? I thought it would be a strange topic just from reading the topic, but I know that people exist who blindly follow the strange notions that one might get from a cult. That said, I was intrigued to read on. Something I found interesting was the way that Parker began each chapter with a quote. Granted, I’d seen other books do this, yet it seemed more meaningful here. The first half of the book used quotes from the leader, “Pioneer.” Later on she uses quotes from different real-life cult leaders–a strong twist that, I think, provided a bit more of a realistic approach because it reminds the reader that these people really do exist. Great idea!

What do I even say here? Man. Lyla was an amazing lead female character. I enjoyed her transition from child to fragile, hopeless follower to kick butt and save-the-day girl!

Cody: Without giving any spoilers—he’s a sweet character and Parker was smart in using him to tie everything together.

Pioneer: I’m just going to say this— why would anyone believe anything that this man says?! His ideas were ludicrous, yet the community chose to willingly give up everything (literally!) just to follow him? I suppose that shows what strength is possible with a good sales pitch.

Overall: I got this on NetGalley, but I’m already planning to purchase a copy, probably more than one. I’m already telling friends to snatch it up as soon as it is released. Gated is unlike anything I’ve ever read and it is nice to have a breath of fresh air in the YA world of romance or dystopia every now and then. Thanks for that, Ms. Parker!

Gated comes out NEXT TUESDAY, so grab this one up! I’ll have another reminder up soon–trust me on that 🙂

Just a quick update to say that I haven’t fallen off the earth. I’ve been getting ready for school to start back is all. I promise to still update frequently when school starts even though my book levels may drop from YA to MG 🙂 I also plan to share some ideas that I’ll be using in my library, so that’ll be fun. Be in prayer for me as I make this transition from college graduate to middle school librarian!

Also, be on the look out for an awesome review on Tuesday!

Thanks for all of the support.

I had to let TFiOS sit around in my brain over 24 hours before I could form a coherent post. I’m a John Green fan, but it took me forever to get around to reading this. I’m glad it took me awhile because I was able to see the reactions from others and think, “oh, come on…it can’t really be THAT good.” It IS “THAT good.”

I’m a masochist for sad storylines. TFiOS is told from the POV of 16 Y/O Hazel, a cancer patient who is in terribly poor condition. Her parents urge her to attend a local support group as a way to make friends. At one particular meeting, Hazel meets Augustus Waters. Augustus lost a leg due to a previous bout with cancer, but seemed otherwise healthy. As would be expected–the two fall in love. —That wasn’t a spoiler…come on.

Without giving away too much, I will say that TFiOS is heartbreaking, hilarious, and still shows a realistic view of what cancer does to the body. Hazel and Gus are both terribly optimistic given their circumstances. Their friend Isaac is also usually optimistic and frequently makes jokes at his own expense. What else are they supposed to do?

But it is the ending. And some of the things that are said. ….but mostly that ending. Like I said, it took me a day to let the book boil over in my mind, but I’m still a blubbering mess just thinking about it. I highly recommend it to any late comers such as myself who may have not jumped on the train already. A movie is in the works and Hazel has already been cast, but I still want to nominate myself for the role…you know, just in case the actress has something come up and has to quit?

I’m going to be extremely lazy and not post a picture and synopsis…mostly because I did that on my last post.

I absolutely adored Gorgeous! I got it on Netgalley awhile back and let it sit on my Kindle for awhile. I wish that I’d read it sooner. I didn’t know where Gorgeous was heading in the beginning. Becky Randle’s overweight mother died and Becky called a phone number that she found in a ring box. It turned out to be a famous designer that promised to turn her into the most beautiful woman in the world. However, there was a catch that she had to get married in a year to remain that way.

First of all, I’m a sucker for fairy tale type stories. Gorgeous was like Cinderella meets The Prince and Me (one of my all time favorite movies. I enjoyed Becky as she was a realistic character. She was never quite sure of herself–even as Rebecca, she still doubted if she was ever good enough. Rocher was an amazing best friend character. In fact, she reminded me of a redneck version of Lily in Princess Diaries, so I guess we could throw that in the mix for comparisons.

My favorite part of the book though? The visuals. I could vividly imagine the castle or the clothes that Tom designed for Rebecca. The author did a great job of describing things to the reader so that we’d know what was going on.

While this is YA in nature, I wouldn’t recommend Gorgeous to younger teens due to some strong language. Sadly, profanity is the norm in YA lit these days, but I still wouldn’t suggest that a younger teen read such language. It is best for an older teen or mid-20’s age like myself.

Be prepared for a fun, modern fairy tale if you pick up Gorgeous. It is hilarious and heartbreaking all in the same book! Get it here:  http://www.amazon.com/Gorgeous-ebook/dp/B00B7MW4AE/ref=sr_1_1?ie=UTF8&qid=1374462232&sr=8-1&keywords=gorgeous+paul+rudnick

I got Gorgeous awhile back on Netgalley and am just now reading it. This book is both sad and hilarious so far. Check out the summary and consider reading it with me—review to come soon:

A book that will make you see yourself clearly for the first time.

When Becky Randle’s mother dies, she’s whisked from her trailer park home to New York. There she meets Tom Kelly, the world’s top designer, who presents Becky with an impossible offer: He’ll design three dresses to transform the very average Becky into the most beautiful woman who ever lived.

Soon Becky is remade as Rebecca – pure five-alarm hotness to the outside world and an awkward mess of cankles and split ends when she’s alone. With Rebecca’s remarkable beauty as her passport, soon Becky’s life resembles a fairy tale. She stars in a movie, VOGUE calls, and she starts to date Prince Gregory, heir to the English throne. That’s when everything crumbles. Because Rebecca aside, Becky loves him. But the idea of a prince looking past Rebecca’s blinding beauty to see the real girl inside? There’s not enough magic in the world.

Defiant, naughty, and impossibly fun, GORGEOUS answers a question that bewilders us all: Just who the hell IS that in the mirror?

Just a heads up, Penguin has some awesome one-day deals up on ebooks today. John Green’s The Fault in Our Stars and Sarah Dessen’s Whatever Happened to Goodbye are both on sale. I snatched up Green’s as I’ve been dying to read it for over a year. I have read and LOVE the Sarah Dessen book though! The books are on sale for all formats!

This heart-stopping historical mystery from plot-master Avi will reach the wide audience it deserves with its fresh and compelling new cover treatment!

The night Edmund’s twin sister, Sis, goes missing, the streets of nineteenth-century Providence, Rhode Island, are filled with menacing shadows. As Edmund frantically searches the city, he tries to make sense of what happened: He only left Sis alone long enough to buy bread. How did she vanish in the mere minutes he was gone?

Just as Edmund is about to lose hope of finding her, a stranger appears out of the mist and offers to help. But the man is gloomy and full of secrets. He seems to need Edmund to carry out plans of his own. Can Edmund trust him? And if he doesn’t take the chance, how will he ever find his sister?

I love Avi. This was a re-release, so I’m not sure how I’d previously missed this book in my younger days. I was immediately pulled in to the story. The kids’ aunt went missing and Edmund decided to go find food for him and his sister. Only…when he returned his sister was missing…but the door was still locked. He then meets a mysterious man that we later learn is Poe. From there the story takes us on a fast paced, twisty journey.

I enjoyed The Man Who Was Poe and quickly read it one night when I could not sleep. While it IS written for a younger crowd, this 24 year old was sucked into the story to the point of no return.I do recommend that the reader must be somewhat familiar with Avi to understand this story. Most of his work is dark, while it IS for children. I saw several mixed review alluding to that and couldn’t help but wonder if the previous reviewers had ever read anything else from Avi.